After my last post about the MCU and Arrowverse, I spent some time thinking about both properties. Okay, it was a lot of time. I really like superheroes, y’all.

And given the nature of the post, I was mostly thinking of the future of both franchises. Given the fairly loose and open nature of this blog, I decided it would be fun to share my thoughts – starting with the MCU. Next time? Arrowverse.

Now, as a quick rule, I’m not going to be spending time on anything we know is happening. I want a Ms. Marvel movie or show, and we’re going to get it. I want to see more of Tyler Hoechlin’s Superman, and we’re going to get it. Just sticking to the things that haven’t been officially confirmed – either as a thing we don’t know that’s happening, or a thing we don’t know the details about. Okay?

I thought about saving this for last, but decided to dive right in. Doctor Doom is one of, if not the, greatest super villains of all time. He wants to take over the world because he believes the world would be better under his rule. He is an evil wizard mixed with a mad scientist. He runs a country under his iron boot. He wears a mask because he scarred his face out of his own hubris. I absolutely adore him as a villain, and the MCU needs him.

What they don’t need to do is what the Fantastic Four movies kept trying to do. They made him into a man with poorly defined powers and a metal body. They tried to make his motivation more complex, and they didn’t have him in charge of Latveria. We don’t need Doctor Doom origins. We need him chewing the scenery, using magic and technology as part of a world dominating plan, and we need him to chew the scenery while referring to himself in the third person.

As for what they should do with him?

He should be the new Thanos. He’s back in the shadows, manipulating things. He’s behind some of the threats the various heroes face, appearing only in references in post credit scenes…at first. However, after that happens, heroes start fighting Doom directly as he decides to take matters into his own hands. Not in an Avengers film, but in their own stories. They barely win each time, but they do win. They even catch Doom.

Except it’s a doombot each time.

After that, there can be a proper Avengers battle against him. The details don’t matter much. What matters is that they have some initial establishment, and then doombots. Let’s get classic awesome comic book villainy in here. And don’t mess him up. Don’t make him someone who is trying to stop climate change or save humanity from itself. He’s arrogant, ruthless, and his motives are supremely simple.

The MCU is the most bankable property in movie history. The MCU has, so far, made 22.5 billion dollars. That number is absolutely insane. Of course, that’s just box office. Finding exact numbers for the rest of it is hard, but based on some rough estimates of marketing costs and ancillary merchandise and DVD sales and rentals and all that, it looks like they’ve made close to that amount in profits – and each phase of the MCU keeps making more money than the last.

While it would be disingenuous to say MCU moves are all the same – part of why the MCU works so well is because they aren’t – there’s definitely things that are guaranteed to be true about a Marvel movie. It’s a PG-13 action movie that has family friendly levels of violence that is usually edited to death except for a single long continuous shot during act 3, the movie will be inoffensive to as many people as possible, and it will have a certain look and feel to it. A superhero will be the protagonist, the comedy will be used to cut the drama a bit…you know what I’m talking about. When you see a Marvel movie, you know it.

That’s a strength, but I’d like to see them try something new.

The inspiration for this section.

What about something based on Marvel’s award winning Marvels comic that was from the POV of the man on the street, watching the battles of heroes play out? It’s an incredible story they have there, and you should absolutely check it out, and a feature film based around that now that the MCU is established could be breathtaking.

On the other hand, what about something from the perspective of a villain? Maybe not even a big name villain, but a henchman working for a big name who undergoes a full character arc and either redeems themselves or realizes the “hero” isn’t everything they seem or just decides that while they might be a “bad guy,” they’re not evil. Hell, Wreck-It Ralph had a similar concept – imagine that, but with superheroes.

There’s so much potential in the marvel universe, and I’d love to see Marvel do something risky.

Oh, and while we’re at risk taking – give a film to Hulkling and Wiccan, or Miss America, or Northstar. They’re all damn good characters that can carry a movie on their own – well, Hulking and Wiccan work best as a duo – and they’re LGBTQ. There’s been twenty-three of these films, with 7 more planned. We’re going to get to 30 movies without a headline character that is anything other than heterosexual and cisgendered. Can we get an LGBTQ character before we hit 40?

Jessica was empowered by an experiment designed to save her life when she was a child. Her powers do include the spider-man classics of sticking to walls and super strength, but she can also fly and shoot lasers – sorry, ‘venom blasts’ – out of her hands, because flight and laser hands are two traits everyone thinks of for arachnids. She was also raised by the High Evolutionary, a fascinating character that is working to evolve a race of New Men from animals and ascend humanity to its next evolutionary phase. Then she was kidnapped by Hydra and brainwashed into being their servant. Then freed and became a hero. 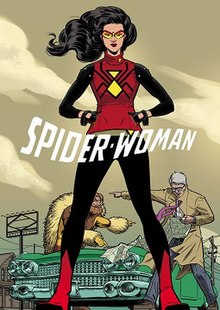 But, rewind. The MCU is done with Hydra. They were dismantled in Winter Soldier and Agents of SHIELD. So instead focus on the pre-brainwashing phase. A woman with powers raised by a mad scientist and grew up among his sentient animal experiments who decides to become a hero. The only reason that doesn’t already exist is because, most likely, of rights to the character with Sony. Now that Marvel and Sony are playing nice together, however, we can absolutely get Ms. Drew.

Also, in the comics, she becomes Carol Danver’s best friend, and her relentless snark is a great counterbalance to Captain Marvel’s bottomless optimism. They play off each other wonderfully, and I fell in love with both characters because of their interactions. I want them to bring in Jessica Drew so we can have that.

Hey, guess which of these points is going to reappear in the Arrowverse list?

Right now the MCU has two modes, mainly – solo film, or big event driven crossover. The only exception that comes to mind is Spider-Man, Homecoming, where Iron Man was there as a mentor figure. Why not do more smaller crossovers? Ant-Man and Doctor Strange have the same stomping grounds and deal with inter dimensional stuff, how fun would it be to watch those two team up? We’re getting Natalie Portman as Thor in Thor: Love and Thunder, and knowing nothing about the film I want her and Carol Danvers to team up just for the special effects fireworks show. Spider-Man and Shuri need to meet and drive T’Challa insane with pop-culture references he can’t follow while they also geek out.

Don’t do every crossover in the big events. Small ones here and there. Keep them to something that happens during Act 2 of whoever is the headlining character, have them pop back up for the Act 3 fight to help out, and help the universe feel more connected outside the big threats to the world.

We know the X-Men are coming at some point. It hasn’t been confirmed, but we know it’ll be here. Given how often the criticism leveled against the X-Men is “why are people prejudiced against mutants but not against other powered people?” there might be a temptation to “fix” that “problem”. The Fox movies avoided it by taking place in a world where there were no other powered people, just mutants.

I am afraid that they’ll make the mistake that so many fantasy and sci-fi franchises do and “fix” it by justifying the bigotry. They’ll have Magneto attack first, or some mutants do something bad and that is the reason for the bigotry. This is a terrible trope I’m so sick of that I’ll break down at some point in the future, but for now…bigotry and prejudice comes from a place of fear, misunderstanding, and irrationality. That’s how the world works, and that’s how the X-Men should work.

Oh, and send them to space at some point, and let them fight crazy demon things? They don’t need to only fight Magneto and Weapon X. Give them some variety. While you’re at it, it’s time to bite the bullet and declare that part of Magneto’s mutation is slowed aging. This will let you keep him a Holocaust survivor – which is vitally important to his characterization – without straining credibility too much. As of right now, if he was 10 in the 1940’s, he’d be just under 80. That’s fine, we can have an 80 year old superhero, but these movies aren’t coming out for 5 years, and will probably run for many, many more. You’ll eventually have to pull the trigger on it, so might as well do so now.

Want something to make up for the dissapointment we’re not getting any of my phenomenal ideas?Try reading a free book!